APRYLL AILEEN in the CBC Searchlight TOP 100 in Canada! 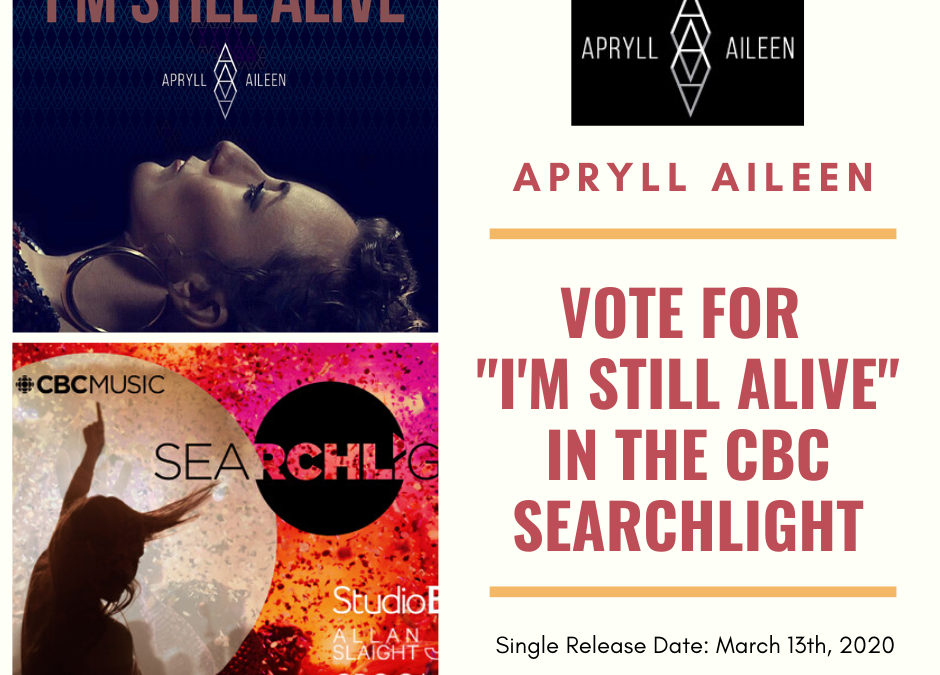 APRYLL AILEEN in the CBC Searchlight TOP 100 in Canada!

SAINT JOHN, NB – Apryll Aileen’s soon-to-be-released single, “I’m Still Alive” has made it to the TOP 100 across Canada in the 2020 CBC Searchlight Contest. The Searchlight contest happens annually and is the public broadcaster’s hunt for the nation’s next, great undiscovered talent.

“I’m Still Alive”, Aileen’s upcoming single, is about a crash collision with karma.

Written by Aileen and Toronto based Producer/songwriter/musician Tal Vaisman, the song is the darkest sounding single she’s released to date. The song was created when Aileen was going through a particularly dark emotional time, frustrated by industry experiences and what she calls, some “inner demons of her own expectations”:

“We created this song in about two hours and for me, it was therapy. It was our first time writing together but it was effortless. I was so angry going into the studio session that day, there was nothing I could do but write a song like this one. There’s always that one moment in an argument, that blows up in your face as you are trying to douse the flames. Thanks to Tal’s guitar licks and alt-rock vibes, I think we were able to articulate that moment – the climax of an argument, where both have torn each other apart, highlighting each other’s weaknesses through judgment of the other, realizing that you are not so different after all.”

But the message in the end, is one of survival. One of perseverance. One of the phoenix rising from the ashes.

Could there also be a reference to the Salem Witch Trials in here? Her lyrics, “Oh is it a sign? Would you drown me in water or wait for my body to rise?” share the truth about how regardless of the action, one is seen as guilty and will perish:

“A swimming test is something that was used during the 17th and 18th century. If a woman was believed to have been a witch, they would tie her up and throw her into a body of water to let a higher power decide the fate. If she drowned, she was innocent. If she lived, she would be burned at the stake, deemed a witch.”

Listeners can preview the song through the CBC Searchlight Contest and vote until Tuesday, Feb. 25th at 3PM ET, 4PM AST, by visiting here:

The song and the official music video will be released on Friday, March 13th, 2020.